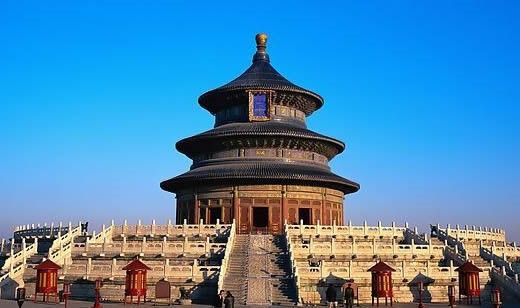 The temple complex was constructed from 1406 to 1420 during the reign of the Yongle Emperor, who was also responsible for the construction of the Forbidden City in Beijing. The complex was extended and renamed Temple of Heaven during the reign of the Jiajing Emperor in the 16th century. Jiajing also built three other prominent temples in Beijing, the Temple of Sun in the east, the Temple of Earth in the north, and the Temple of Moon in the west. The Temple of Heaven was renovated in the 18th century under the Qianlong Emperor. By then, the state budget was insufficient, so this was the last large-scale renovation of the temple complex in imperial times.

In 1914, Yuan Shikai, then President of the Republic of China, performed a Ming prayer ceremony at the temple, as part of an effort to have himself declared Emperor of China. In 1918 the temple was turned into a park and for the first-time open to the public.

The Temple of Heaven was inscribed as a UNESCO World Heritage Site in 1998 and was described as “a masterpiece of architecture and landscape design which simply and graphically illustrates a cosmogony of great importance for the evolution of one of the world’s great civilizations…” as the “symbolic layout and design of the Temple of Heaven had a profound influence on architecture and planning in the Far East over many centuries.

The Temple grounds cover 2.73 km² of parkland and comprises three main groups of constructions, all built according to strict philosophical requirements:

The Circular Mound Altar is the altar proper, located south of the Imperial Vault of Heaven. It is an empty circular platform on three levels of marble stones, each decorated by lavishly carved dragons. The numbers of various elements of the Altar, including its balusters and steps, are either the sacred number nine or its nonuples. The center of the altar is a round slate called the Heart of Heaven or the Supreme Yang , where the Emperor prayed for favorable weather. Thanks to the design of the altar, the sound of the prayer will be reflected by the guardrail, creating significant resonance, which was supposed to help the prayer communicate with Heaven. The Altar was built in 1530 by the Jiajing Emperor and rebuilt in 1740.