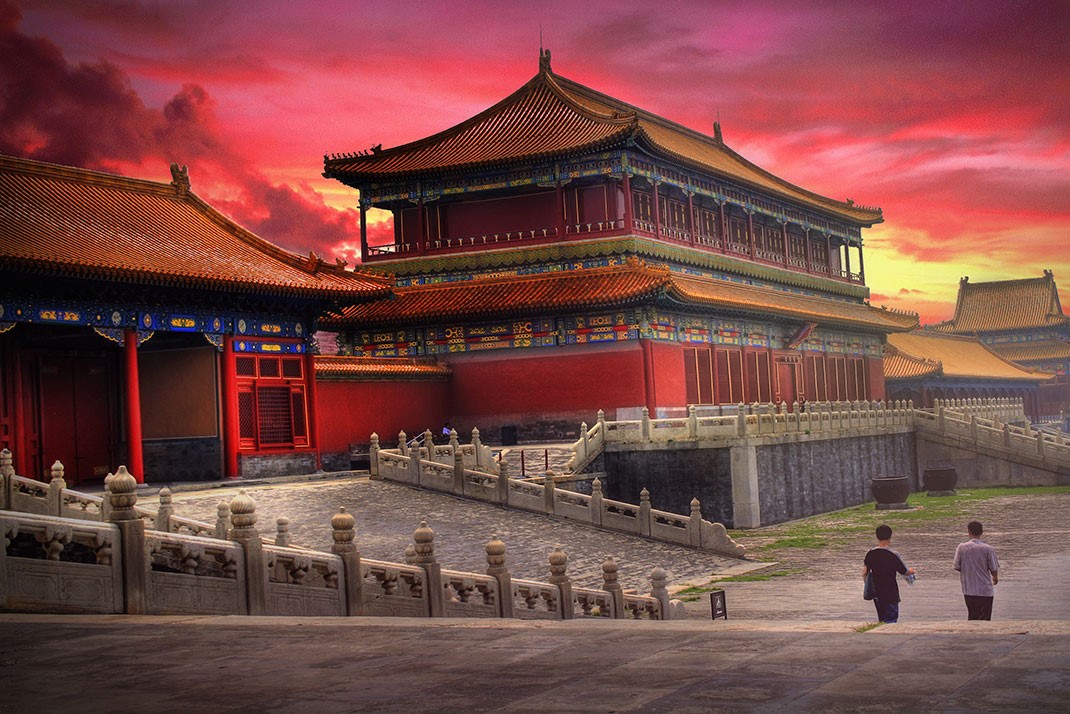 The Forbidden City was the Chinese imperial palace from the Ming dynasty to the end of the Qing dynasty—the years 1420 to 1912. It is in the center of Beijing, China, and now houses the Palace Museum. It served as the home of emperors and their households as well as the ceremonial and political center of Chinese government for almost 500 years.

Constructed from 1406 to 1420, the complex consists of 980 buildingsand covers 72 ha (over 180 acres). The palace complex exemplifies traditional Chinese palatial architecture, and has influenced cultural and architectural developments in East Asia and elsewhere. The Forbidden City was declared a World Heritage Site in 1987, and is listed by UNESCO as the largest collection of preserved ancient wooden structures in the world.

Since 1925 the Forbidden City has been under the charge of the Palace Museum, whose extensive collection of artwork and artefacts were built upon the imperial collections of the Ming and Qing dynasties. Part of the museum’s former collection is now in the National Palace Museum in Taipei. Both museums descend from the same institution, but were split after the Chinese Civil War. With over 14.6 million visitors in 2015, the Palace Museum is the most visited art museum in the world.

The name “Zijin Cheng” is a name with significance on many levels. Zi, or “Purple”, refers to the North Star, which in ancient China was called the Ziwei Star, and in traditional Chinese astrology was the heavenly abode of the Celestial Emperor. The surrounding celestial region, the Ziwei Enclosure , was the realm of the Celestial Emperor and his family. The Forbidden City, as the residence of the terrestrial emperor, was its earthly counterpart. Jin, or “Forbidden“, referred to the fact that no one could enter or leave the palace without the emperor’s permission. Cheng means a city.

Today, the site is most commonly known in Chinese as Gùgōng , which means the “Former Palace”. The museum which is based in these buildings is known as the “Palace Museum” .

When Hongwu Emperor’s son Zhu Di became the Yongle Emperor, he moved the capital from Nanjing to Beijing, and construction began in 1406 on what would become the Forbidden City.

Construction lasted 14 years and required more than a million workers.Material used include whole logs of precious Phoebe zhennan wood found in the jungles of south-western China, and large blocks of marble from quarries near Beijing. The floors of major halls were paved with “golden bricks”, specially baked paving bricks from Suzhou.

From 1420 to 1644, the Forbidden City was the seat of the Ming dynasty. In April 1644, it was captured by rebel forces led by Li Zicheng, who proclaimed himself emperor of the Shun dynasty.He soon fled before the combined armies of former Ming general Wu Sangui and Manchu forces, setting fire to parts of the Forbidden City in the process.

By October, the Manchus had achieved supremacy in northern China, and a ceremony was held at the Forbidden City to proclaim the young Shunzhi Emperor as ruler of all China under the Qing dynasty. The Qing rulers changed the names on some of the principal buildings, to emphasise “Harmony” rather than “Supremacy”, made the name plates bilingual (Chinese and Manchu), and introduced Shamanist elements to the palace.

After being the home of 24 emperors – 14 of the Ming dynasty and 10 of the Qing dynasty – the Forbidden City ceased being the political centre of China in 1912 with the abdication of Puyi, the last Emperor of China. Under an agreement with the new Republic of China government, Puyi remained in the Inner Court, while the Outer Court was given over to public use, until he was evicted after a coup in 1924. The Palace Museum was then established in the Forbidden City in 1925. In 1933, the Japanese invasion of China forced the evacuation of the national treasures in the Forbidden City.Part of the collection was returned at the end of World War II, but the other part was evacuated to Taiwan in 1948 under orders by Chiang Kai-shek, whose Kuomintang was losing the Chinese Civil War. This relatively small but high quality collection was kept in storage until 1965, when it again became public, as the core of the National Palace Museum in Taipei.

After the establishment of the People’s Republic of China in 1949, some damage was done to the Forbidden City as the country was swept up in revolutionary zeal. During the Cultural Revolution, however, further destruction was prevented when Premier Zhou Enlai sent an army battalion to guard the city.

The Forbidden City was declared a World Heritage Site in 1987 by UNESCO as the “Imperial Palace of the Ming and Qing Dynasties”, due to its significant place in the development of Chinese architecture and culture. It is currently administered by the Palace Museum, which is carrying out a sixteen-year restoration project to repair and restore all buildings in the Forbidden City to their pre-1912 state.

In recent years, the presence of commercial enterprises in the Forbidden City has become controversial. A Starbucks store that opened in 2000 sparked objections and eventually closed on 13 July 2007.Chinese media also took notice of a pair of souvenir shops that refused to admit Chinese citizens in order to price-gouge foreign customers in 2006.